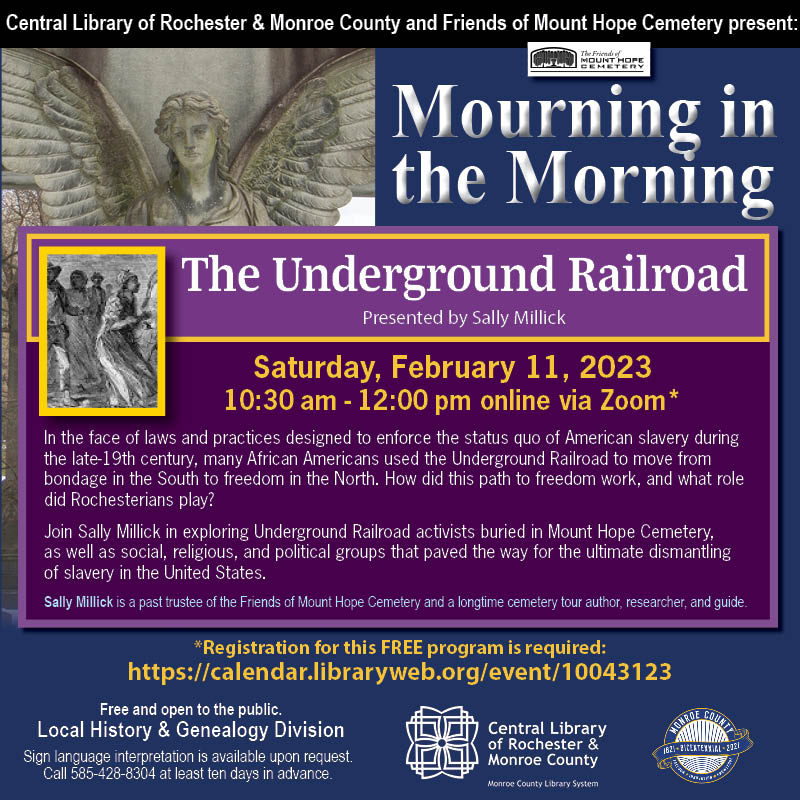 Mourning in the Morning: The Underground Railroad Online

REGISTRATION IS REQUIRED for this free online event (see below). Registrants will receive the Zoom link in an email one hour before the talk begins.

Rochester and Central New York were a hotbed of social and religious change in 19th-century America. In the face of laws and practices designed to enforce the status quo of American slavery, many African Americans used the Underground Railroad to move from bondage in the South to freedom in the North. How did this path to freedom work, and what role did Rochesterians play?

Join Sally Millick in exploring some of the Underground Railroad activists who are buried in Mount Hope Cemetery, as well as the social, religious, and political groups that paved the way for the Emancipation Proclamation in 1863 and the ultimate dismantling of "The Peculiar Institution" in the United States.

Sally Millick is a past trustee of the Friends of Mount Hope Cemetery and a longtime cemetery tour author, researcher, and guide. She is currently a board member of the Friends & Foundation of the Rochester Public Library. Millick has contributed to several books on the history of Upstate NY and Mount Hope Cemetery, and has photographed many Victorian-era cemeteries in her travels, most recently to the Colon Cemetery in Havana, Cuba.