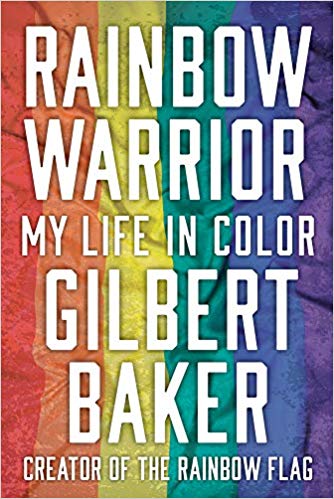 Join us for a celebration of the life and work
of Gilbert Baker, the creator of the rainbow
flag. Baker’s life will be celebrated through
film and readings from his recently published
autobiography, Rainbow Warrior: My Life in Color. A
panel discussion will follow on the legacy of Baker’s
art and life. Copies of Rainbow Warrior will be
available for sale and signing.

Gilbert Baker (1951-2017) was an activist, designer and flag
maker renowned for the creation of the first Rainbow Flag in
1978. Working with friends, he created the iconic flag that
would be unveiled at San Francisco’s Gay Freedom Day Parade
on June 25. The flag’s immediate success led to Baker developing a rich career as both
activist and designer, using his creations to further causes around the world.

Manager of Creative Projects for the Gilbert Baker Estate, Beal was a longtime friend of Baker and traveled across the world with him in presenting the Rainbow Flag. He also accompanied Baker to the White House in 2016, when he presented a Rainbow Flag to President Barack Obama during LGBT History Month. Charley Beal is a lifelong social activist who attended his first civil rights demonstration in 1962. Beal is an award-winning art director for film and television, working with renowned directors that include Mike Nichols, Nora Ephron, Ridley Scott, and Gus Van Sant. His film credits include Sleepless in Seattle, First Wives Club, In & Out, Milk and Eat Pray Love. TV credits include Boardwalk Empire, Smash, Gotham, and Power.

Christopher is the youngest of six, all of whom were ballet dancers. After graduating from high school in 1982, he joined the Franciscans in Times Square. After 5 years and some haunting experiences, Christopher left the order and joined ACT UP, where he found his voice for protest and advocacy. In 1989, Christopher was arrested with other AIDS/Women’s Health Activists in St. Patrick’s Cathedral. “It was the strongest prayer of his life,” as recorded in the NY Times. On February 11, 1991, Christopher was protesting at an ACT UP demonstration when he was accosted by several New York City policemen assigned to the event. They beat him so severely that he suffered a brain injury. In June of 1994, he joined Rainbow Flag creator Gilbert Baker and other activists in New York City’s Federal Court to demand the right to march along Fifth Avenue during the 25th anniversary of the Stonewall. Christopher now lives in Rochester and works on issues regarding poverty, housing and civil rights for all.

Madelyn grew up in Rochester, NY.  She is a self-proclaimed paper addict, ink mixer, and letterpress printer.  She loves to send snail mail.  When she is not behind an antique press you can find her working at Highland Hospital as an ICU nurse, working with her wife Jennifer at Hedonist Artisan Chocolates, or at home playing and running after their son Charlie Parker who just turned two!

O’Toole is Executive Director of the We Exist Coalition of the Finger Lakes, focused on advocacy for the trans community. She has written several books, including her memoir, You Can't Shave In a Minimart Bathroom.  She is a public speaker and activist in the Greater Rochester area.

Trent L. Marshall, a native Rochesterian, is a veteran community advocate for the homeless, substance use disorder, mental illness, AIDS/PLWA, the disenfranchised and the LGBTQ community. He is currently the vice president of the Baden Street Settlement (BOD). The mission of Baden Street Settlement is to improve the quality of life for adults, children and families of neighborhood residents; to eliminate the causes of poverty; and to reduce negative social problems associated with being poor and disadvantaged. Marshall is currently Personnel Director for a Rochester Based Consumer Directed Assistance Service (CDPAS). He was raised and still lives in the southwest side of the city (19th Ward).