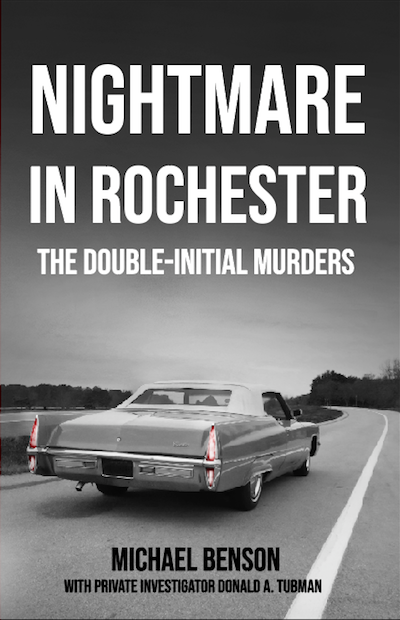 In 1971, Rochester, N.Y. began to suffer a series of hideous murders, cases that offered the starkest of contrast between good and evil: perfectly innocent victims, perfectly evil predators. The three victims were little girls, each named with the same first and last initial. Each, the legend said, had been dumped in a town that also began with that letter. The victims were last seen in an urban setting and their lifeless bodies were found along a rural roadside, strangled by ligature. Local girls with alliterative names were on high alert and told to be vigilant. No one wondered why the initials were important, what it all meant. They understood one thing: it was terrifying. Join acclaimed author Michael Benson to learn more about these horrific events as he discusses his recent book, Nightmare in Rochester: The Double-Initial Murders.

Michael Benson was born in Rochester and raised in Chili. Today, he is one of the world’s most popular true-crime writers. His books—including Nightmare in Rochester, Betrayal In Blood, Killer Twins and The Devil at Genesee Junction—tell vividly of heinous criminals, their tragic victims, and the clever and stalwart lawmen who bring them to justice. On TV, he was recently seen on ABC’s 20/20 and is a regular commentator on the Investigation Discovery (I.D.), Oxygen, and HLN channels. He has appeared on Murder in the Family with Geraldo Rivera, Inside Evil with Chris Cuomo, People Magazine Investigates, Evil Twins, and Evil Kin.Benson has a B.A. with honors in Communication Arts from Hofstra University. He is the winner of an Academy of American Poets award, and was in 2016 named a Wheatland-Chili High School Graduate of Excellence.