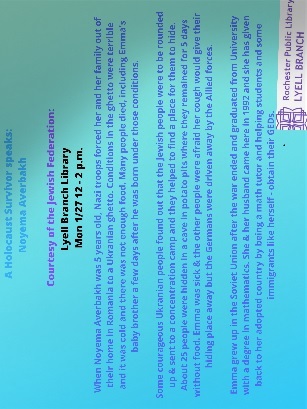 When Noyema Averbakh was 5 years old, Nazi troops forced her and her family out of their home in Romania to a Ukranian ghetto. Conditions in the ghetto were terrible and it was cold and there was not enough food. Many people died, including Emma's baby brother a few days after he was born under those conditions.

Some courageous Ukranian people found out that the Jewish people were to be rounded up and sent to a concentration camp and they helped to find a place for them to hide. About 25 people were hidden in a cave in potato pits where they remained for 5 days without food. Emma was sick and the other people were afraid her cough would give their hiding place away but the Germans were driven away by the Allied forces.

Emma grew up in the Soviet Union after the war ended and graduated from University with a degree in mathematics. She & her husband came here in 1992 and she has given back to her adopted country by being a math tutor and helping students and some immigrants like herself - obtain their GEDs.