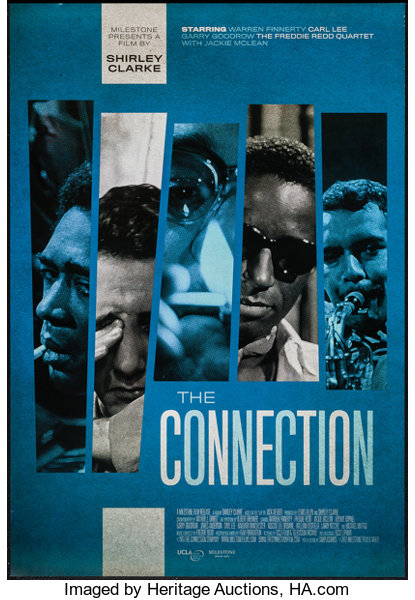 The Reynolds Media Center is proud to present the films of Shirley Clarke to commemorate International Jazz Day, April 30, 2020.

On Thursday, April 30, we present Ornette: Made In America, a documentary on the free jazz pioneer and featuring testimony from a host of acolytes and collaborators. This rarely seen and fully restored 1984 film is essential for anyone hoping to understand the history of jazz in America.

On Friday, May 1, we present The Connection, another restoration from Milestone Films and also considered a highlight in the history of jazz cinema. Set in a squalid Greenwich Village apartment, a group of drug addicts are waiting for their connection, Cowboy, to bring their fixes. Many of them are jazz musicians between gigs who perform while they wait. The score is written by Freddie Redd. Thus begins the film within a jazz concert. Shirley Clarke's groundbreaking film of Jack Gelber's 1959 play, which has been described as a "drug-addled crossing of 'A Midsummer Night's Dream' and 'Waiting For Godot'," is an example of cinéma vérité, which uses improvisation and camera work to uncover the truth behind reality.

In addition to being little seen classics of music films, these movies are also a look at one of the unsung directors of independent film making and a pioneering woman filmmaker, truly a not-to-be-missed opportunity.