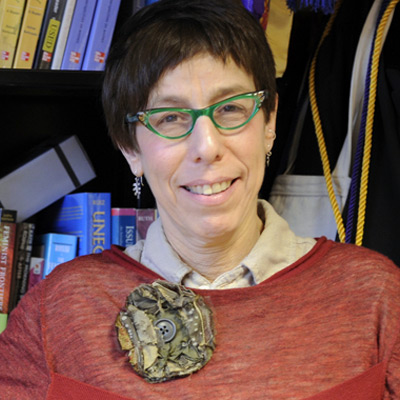 As the United States pauses to mark the centennial passage of the 19th Amendment, we must remember that battles for women’s enfranchisement unraveled across a global stage. This talk examines women’s suffrage from this global perspective, highlighting historical roots leading up to the 19th Amendment developed in a global context. Tracing the timing and progression of women’s suffrage around the globe, this talk will consider ways suffrage movements and campaigns varied worldwide and ways they were interconnected across countries and people. Closing remarks will reflect on the status of women’s freedoms today and the significance of women exercising civic voice in affairs of state, nation, and empire.

Dr. Barbara LeSavoy is Associate Professor in the Department of Women and Gender Studies at the College at Brockport (SUNY). She served as director then chair over a span of 12 consecutive years where she built a small program into its current department status. She teaches Feminist Theory; Global Perspectives on Women and Gender; Gender, Race, and Class; and Senior Seminar in Women and Gender Studies. Her research and publication areas include women’s global human rights, identity politics in literature and popular culture, and historical to contemporary perspectives on gender equality. Her most recent scholarship includes two forthcoming coauthored book chapters, Seneca Falls and legacies of women’s rights, and technologies of affect in memorializing Holocaust trauma. Dr. LeSavoy serves as lead faculty for a global classroom linking students at The College at Brockport with students at Veliky Novgorod State University in Russia, and she has taught a Women and Gender Studies Seminar for several summers at the NY-St. Petersburg Institute of Linguistics, Cognition, and Culture (NYI) in St. Petersburg, Russia. Among her many accolades, Dr. LeSavoy is the 2017 recipient of the Brockport Presidential Award for Teaching Excellence.