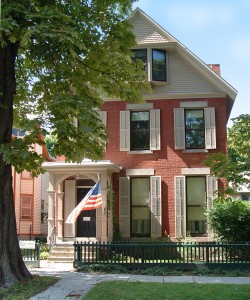 Martha Taylor Howard was the prime mover in the purchase of the Susan B. Anthony House in Rochester and opening it as a museum (she called it a "shrine") in 1945. She worked tirelessly to raise money for the purchase, mostly in donations of under $5. She then devoted her life to publicizing the House and raising money for its upkeep. Howard also coordinated the effort to get Susan B. Anthony inducted into the Hall of Fame for Great Americans.. Although she was in her sixties when she moved to Rochester, she became a well known local figure.

Jenny Lloyd grew up in England. During her twenty years as a corporate wife she lived in Britain, Italy and Mexico before moving to Rochester in 1980. After an eclectic teaching career she got her PhD at age 52 and became a history professor at the College at Brockport, where she also directed the Women’s Studies and History MA programs, and chaired the History Department. She has published four scholarly articles and a book about Methodist women preachers in nineteenth-century England. Since her retirement in 2009 she has published Catching Meggie The Runaway Shetland Sheepdog, an account of catching their dog after nine months on the run; In My Mind’s Eye, a memoir of growing up on a farm in the West of England; and Expatriation, about her life in Italy and Mexico. Also since her retirement she has taught courses in history and related topics at Oasis Rochester, an organization for those over fifty, and at Penfield Recreation. She gives a talk at the Susan B. Anthony House once a year, and volunteers in the House archive.