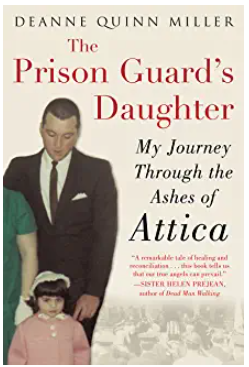 The Ashes of Attica

Deanne Quinn Miller was five years old when her father, William “Billy” Quinn, was killed during the Attica prison uprising in 1971. He was the only corrections officer to die at the hands of inmates. Thirty-nine others—inmates and prison guards—were killed in a barrage of gunfire when police stormed the prison.

Miller was left to wonder how exactly her father had died and who his killers were. Those questions haunted her and wreaked havoc on her psyche for thirty years. She finally started to find answers after she joined the Forgotten Victims of Attica.

Drawing on her new memoir, The Prison Guard’s Daughter: My Journey Through the Ashes of Attica, Miller will share what she has learned about her father, the inmates and guards who were at Attica in 1971, and the fateful standoff. Her process has helped to bring closure not only for herself but for the other victim’s families, the former prisoners she met, and all of those who perished during the prison “retaking.” Miller will be joined by co-author Gary Craig.

Deanne Quinn Miller is co-founder of the Forgotten Victims of Attica, which secured $12 million in reparations for its members, counseling for all who sought it, and an annual memorial at the prison.

Gary Craig is a criminal justice reporter with the Democrat & Chronicle watchdog investigative team. He has covered the aftermath of the Attica uprising since 2000.

This program is sponsored by the Local & Genealogy Division in conjunction with the exhibition, Open Wounds: The 50-Year Legacy of the Attica Prison Uprising, on display in the 2nd floor conference room, Rundel Memorial Building, through January 2022.