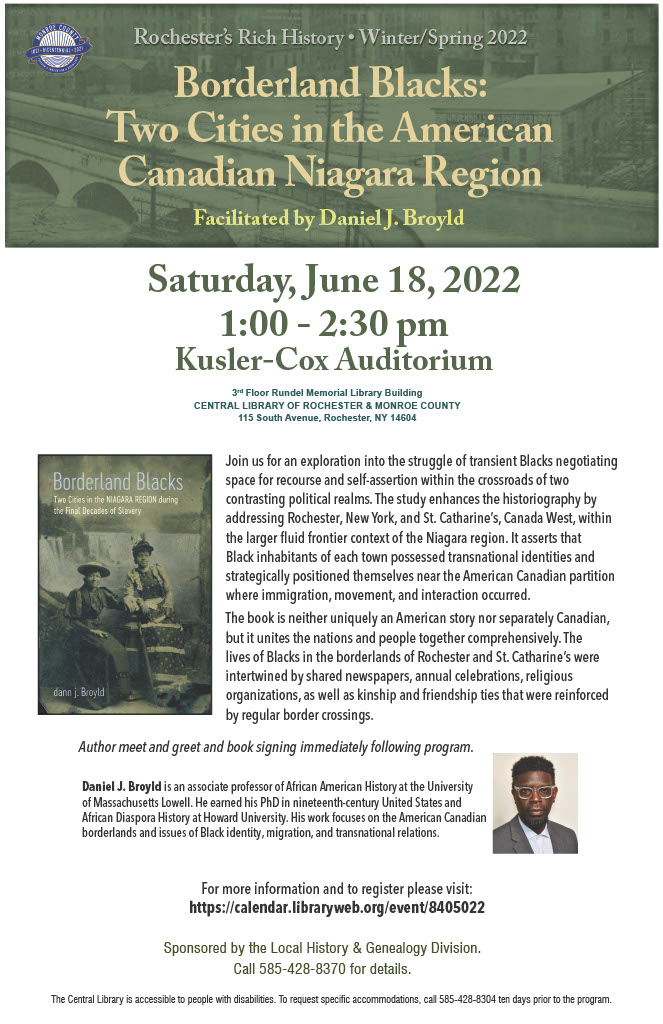 Join us for an exploration into the struggle of transient Blacks negotiating space for recourse and self-assertion within the crossroads of two contrasting political realms. The study enhances the historiography by addressing Rochester, New York, and St. Catharines, Canada West, within the larger fluid frontier context of the Niagara region. It asserts that Black inhabitants of each town possessed transnational identities and strategically positioned themselves near the American-Canadian partition where immigration, movement, and interaction occurred. It contributes to the scholarship of African American History through its contention that physical separation via formalized national barriers did not sever concepts of psychological memory or restrict social ties.

The book is neither uniquely an American story nor separately Canadian, but it unites the nations and people together comprehensively. The study involves complex individuals who negotiated the overlapping worlds of the United States, Canada, Great Britain, and the African Diaspora. The lives of Blacks in the borderlands of Rochester and St. Catharines were intertwined by shared newspapers, annual celebrations, religious organizations, as well as kinship and friendship ties that were reinforced by regular border crossings. In all, the objective of Borderland Blacks is to elucidate how the times and terms of emancipation affected Blacks on each side of the border, while demonstrating their political agency to pit the United States and British Canada against one another for the best possible outcomes.

Daniel J. Broyld is an associate professor of African American History at the University of Massachusetts Lowell. He earned his PhD in nineteenth-century United States and African Diaspora History at Howard University. His work focuses on the American-Canadian borderlands and issues of Black identity, migration, and transnational relations.