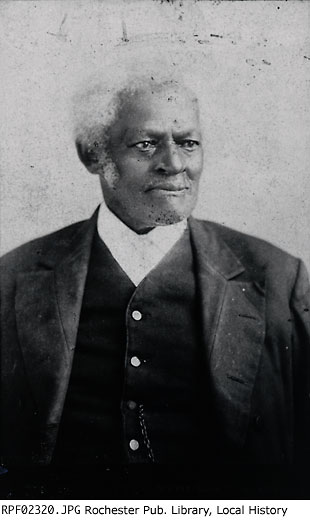 An unassuming grave in Rochester New York’s Historic Mt. Hope Cemetery marks Rev. Thomas James’s 1891 death without any hint of the remarkable life he led. Rev. Thomas James was born enslaved in Canajoharie, Montgomery County, New York in 1804. He escaped, after being ill-treated, and never looked back! His contributions included building schools and churches in New York and Massachusetts – many still are in operation today. He traveled the country under the auspices of the American Missionary Society speaking against the institution of slavery and the papacy. As he journeyed, he found himself in positions to effect change across the country including integrating the transportation system in Boston, assisting in the release of the Amistad captives, and freeing 2000 enslaved persons in Kentucky after the Emancipation Proclamation was issued, just to name a few. His work around the country earned him the designation as the most well-known, abolitionist preacher in the Nineteenth Century. He met Frederick Douglass before he was the Nineteenth Century’s most famous orator and statesman. But he also bumped heads with many, including Austin Steward – the first Black businessman in Rochester – over religious doctrine and the position Blacks should have in this country. Toward the end of his life, Rev. Thomas James was the oldest, living abolitionist in the country. At the urging of others, he wrote his autobiography in 1886 where he humbly stated his life was “a simple one, perhaps hardly worth the telling.” This was farthest from the truth!

Cheryl Sampson is a “Professional Museum-Goer” currently working towards her MA in (Public) History at SUNY Brockport with a focus on 19th and early 20th century Black culture and Institutions. She is married to Rev. Ronald Sampson and has four adult children and four grandchildren.