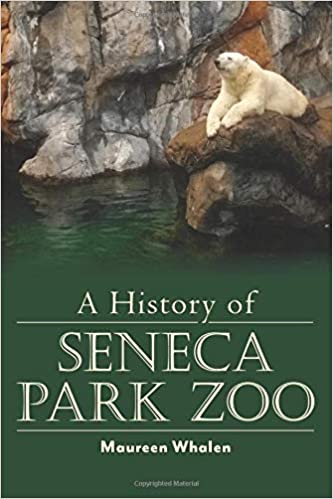 In April 2020, Maureen Whalen published the first and only comprehensive history of Seneca Park Zoo. Her book, A History of Seneca Park Zoo, traces the Zoo’s history from 1894 through 2013. In this program she’ll track the many changes at the Zoo from its years as a menagerie collection emphasizing the entertainment value of animals to its current role as a leader in species conservation and habitat preservation. “Today,” she likes to say, paraphrasing a vintage Oldsmobile commercial, “this is not your father’s zoo.” She’ll also talk about some of the animals who have been favorites of zoo-goers over its twelve and a half decades.  Whalen, who has been a docent at the Seneca Park Zoo since 2006, spent eight years searching through old newspaper accounts and annual reports, conducting interviews, and writing the history.

Since retiring as the Branch Manager of the Charlotte Branch of the Rochester Public Library, Maureen Whalen has pursued her interests in researching local history. She co-wrote a history of the Rochester Public Library, One Hundred Years of Service. As a volunteer at the Greece Historical Society and Museum she has curated exhibits on topics ranging from the Underground Railroad to Prohibition.