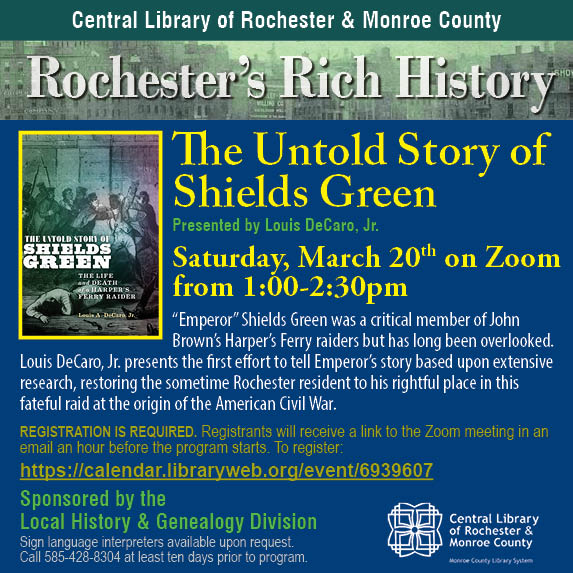 When John Brown decided to raid the federal armory in Harper’s Ferry as the starting point of his intended liberation effort in the South, some closest to him thought it was unnecessary and dangerous. Frederick Douglass, a pioneering abolitionist, refused Brown’s invitation to join him in Virginia, believing that the raid on the armory was a suicide mission. Yet in front of Douglass, “Emperor” Shields Green, a fugitive from South Carolina, accepted John Brown’s invitation. When the raid failed, Emperor was captured with the rest of Brown’s surviving men and hanged on December 16, 1859.

“Emperor” Shields Green was a critical member of John Brown’s Harper’s Ferry raiders but has long been overlooked. Louis DeCaro, Jr., a veteran scholar of John Brown, presents the first effort to tell Emperor’s story based upon extensive research, restoring him to his rightful place in this fateful raid at the origin of the American Civil War. Starting from his birth in Charleston, South Carolina, through his years as a sometime resident of Rochester, New York, Green’s life as an abolitionist freedom-fighter, whose passion for the liberation of his people outweighed self-preservation, is extensively detailed in this new biography. In The Untold Story of Shields Green, Emperor pushes back against racism and injustice and stands in his rightful place as an antislavery figure alongside Frederick Douglass and John Brown.

Louis A. DeCaro Jr. holds graduate degrees in theology and history from Westminster Theological Seminary and New York University, and a Ph.D. from New York University.  He is an ordained clergyman and has served in a number of churches in the Greater New York City area but has been Professor of History and Theology at Alliance Theological Seminary in New York City for over a decade.  As a biographer, Lou has published two books about the religious aspects of the human rights activist, Malcolm X, most notably, On the Side of My People: A Religious Life of Malcolm X (NYU Press, 1995). For over two decades, Lou has devoted in depth study to the life and letters of abolitionist John Brown. His first book on Brown, "Fire from the Midst of You": A Religious Life of John Brown (NYU Press, 2002) continued his interest in religious biography. This was followed by a smaller but substantive work, John Brown—The Cost of Freedom (International Publishers, 2007), which challenges the many errors and mistaken notions that burden Brown’s popular reputation. In 2015, two complementary works were published: Freedom’s Dawn: The Last Days of John Brown in Virginia and John Brown Speaks: Letters and Statements from Charlestown (both on Rowman & Littlefield, 2015)—the first detailed narrative of the abolitionist’s last days since his hanging in 1859.  Lou has contributed articles in a number of other works relating to Malcolm X, John Brown, and abolition. His latest work, The Untold Story of Shields Green: The Life and Death of a Harper’s Ferry Raider (NYU Press, 2020), reveals a unique and challenging effort to rediscover a figure that has been obscured within the conventional history of the struggle for justice in the United States. Lou is married to Michele Sweeting DeCaro, an educator and gospel vocalist.  Their son, Louis Michael, is fourteen years old and aspires to be a civil court judge.